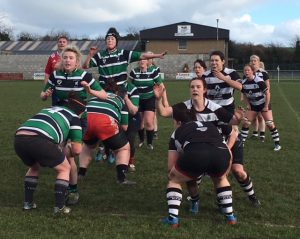 On a dry but cold and windy Sunday afternoon Thurles had home advantage over Clonmel in what was to prove to be a hard fought victory for the home side over their high flying neighbours. For the opening quarter of the game Clonmel and Thurles were evenly matched in most facets of the game with Clonmel having the lions share of territory but failing to score with ball in hand.

The opening score came on 20 minutes when a miss timed pass from Clonmel was skillfully intercepted by the Thurles outside centre Aisling 0 Hagan who ran from just outside her own half of the field to score under the posts. The resulting conversion was slotted over by Scrum Half Christine Coffey bringing the score to 7-0.

From here Thurles increased the intensity becoming more dominant in the scrum against a formidable Clonmel front row that included the vastly experienced Wendy FitzPatrick and Mary Gorey. This intensity was rewarded when No 8 Ciara O Dwyer broke down the centre of the park with a terrific run and offloaded to Gemma Dunican to score out wide on the left hand side. The conversion was narrowly missed by Coffey leaving the score at 12-0 to Thurles

Following the restart, Clonmel stepped up a gear forcing some ferocious defending by Thurles but there was no stopping Clonmel’s loose head prop going over from 1m to score what would be Clonmel’s only score of the game. 12-5 after 35 mins. 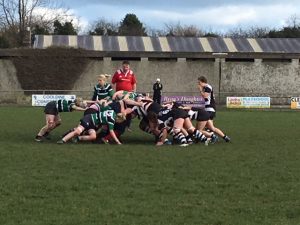 With the Thurles front row of Jean Ryan, Nicola Sweeney and Maria Woodlock becoming more dominant with each scrum, it wasn’t long before the Thurles winger Gemma Dunican was released to cross for her second try, 17-5 The second half continued in much the same fashion as the first had ended. Clonmel continued to fight for every single ball, as usual but it was Thurles who had the final say with a wonderful team try from full back Hollie O Dwyer following a well planned break from the back of the scrum by Ciara O Dwyer. The conversion was just wide and the game finished at 22 – 5 to Thurles. All in all, the game was played in good spirits with The Pack and Ciara O Dwyer in particular having the upper hand for most of this highly entertaining contest.

Training continues every Wednesday and Friday at Thurles at 7:30. New players always welcome