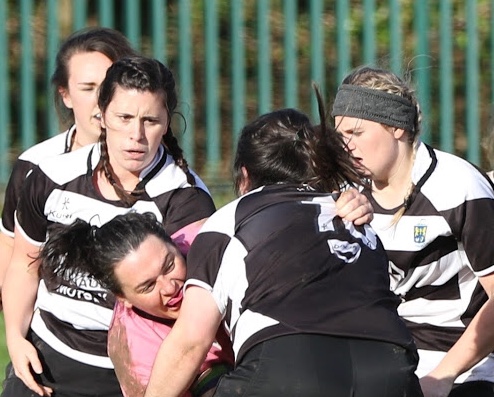 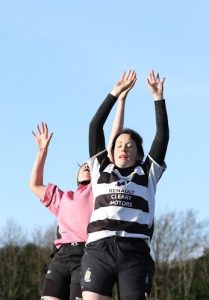 Thurles Women’s team hit the road once again this Sunday for Cork and Ballincollig. With the move of several Highfield Players to Ballincollig it was apparent immediately that this was going to be a tight match but no one was prepared for the end to end action that took place throughout the match. Thurles started stronger than Ballincollig with a great opening few minutes. The Thurles forwards were proving to be way too strong in the scrum creating good opportunities for the backs to open up. Ballincollig managed to turn over the ball but Ciara O’Dwyer made a savage tackle to allow Nicola Sweeney a great carry. Maria Woodlock burst into action holding up a Ballincollig forward and winning a penalty. Joanne Harrison took the penalty quickly but Collig’s No 5 Ger Rae made a super interception and attacked the Thurles line. Aisling O’Hagan made a savage tackle on the number 5 pushing her backwards and turning the ball over following up with a great kick to bring Thurles to Collig’s 22 line. The ball was won by Ballincollig and play ended up back near the half way with a scrum for Collig. From the scrum, Ballincollig attempt to kick for touch but failed as Holly O’Dwyer skillfully kept it in and passed it quickly to Aisling O’Hagan who chipped the ball up the field and followed up with a fantastic run from near the half way to touch down for a Thurles try.

The strength of the Thurles scrum was allowing for some great Thurles attacking but Ballincollig were quick to snap up any possible loose ball and once again it took a superb tackle from Christine Coffey to cause a knock on from Collig. Another strong scrum from Thurles and the ball reached Aisling O’Hagan who chipped the ball over the forwards heads hoping for a replay of the earlier try however the number 5 for Collig was there to retrieve. Laura Carroll made a serious tackle with Holly Dwyer keeping the Thurles try line safe with a strong kick out. Play continued at pace and Nicola Sweeney was called on to make a fantastic tackle with Megan Callanan then carrying great ball forward.

Ballincollig then entered a really strong attacking phase with constant pressure on the Thurles try line. But pressure from Miriam Harrison and Chris Coffey forced an unlikely error from Ballincollig awarding Thurles a scrum. Yet again the Thurles forwards had a great scrum pushing the Collig women backwards. Ball came out and was chipped down the field but Collig came back with force and it took a great tackle once again from Niamh Coman followed by Ciara O’Dwyer to secure the ball with a great clearance kick from Aisling O’Hagan. A knock on from the line out gave the scrum to Ballincollig and their attack reached the Thurles try line but some superb defending including tackles from Aisling Byrne and Maria Woodlock denied them their try with Aisling O’Hagan under the ball for a held up try. Thurles forwards then drove the Collig women back in the scrum and at half time the score remained 5-0.

Ballincollig came out very strong at the start of the second half and some savage tackles were put in from Nicola Sweeney, Ciara O’Dwyer, Maria Woodlock and Chris Coffey. Laura Carroll made a fantastic interception on the ball but unfortunately Ballincollig managed the turn the play over again. A scrum for Thurles followed with Holly Dwyer making a great tackle to halt play and Aisling Byrne securing safety with a great kick to touch. A line out followed and in the ensuing play a Collig player was yellow carded. The intensity of the game meant that players were tiring on both sides now and the penalty toll rose as a result. Ballincollig seemed to grab the upperhand of the game in the last quater and were playing some very attacking rugby with Niamh Coman making a tackle which drove her opposite number back helping Thurles steadytheir defence. A scrum on the 22 for Collig meant yet more pressure and despite a great tackle from O’Hagan Collig finally got in for their first try of the game which they duly converted to lead 7-5.

Following a scrum Aisling Byrne broke quickly and made a great pass to Aisling O’Hagan who kicked the ball long and brought Thurles to Collig’s 22. Thurles poured the pressure on with play after play from the forwards with Niamh Coman carrying great ball and forcing Collig to concede a penalty. Megan Callanan opted to kick for the posts and duly scored – the tight game was notched up even further 8-7 Thurles.

This game was played from one end to the other with non-stop intensity and up to the last few minutes was anybody’s game to take – Ballincollig’s No 5 Ger Rae however was the deciding factor scoring a superb individual try in the dying minutes mowing through 3 or 4 of the Thurles Women to touch down and leave the score at 12-8.

Aisling Byrne however wasn’t finished for Thurles and a great tackle allowed Niamh Coman in to carry the ball forward and start a really quick snap move with the ball flying through the backs hands and Thurles were unlucky with an unfortunate knock on at the last minute. Thurles attacked again and again but Ballincollig’s defence was strong and eventually the pressure showed with Thurles knocking on. A scrum for Ballincollig followed and Joanne Harrison who had secured loads of ball for Thurles in the line outs now made a great tackle to slow the game down. The final play of the game was a scrum with Ballincolliggetting their hands on the ball and kicking for touch. Final score 12-8.

A thoroughly competitive aggressive game from both sides – Thurles will remember losing this one for a long time and learn from it.

The whole team and management would like to wish Miriam Harrison a very Happy Wedding Day on Friday next.