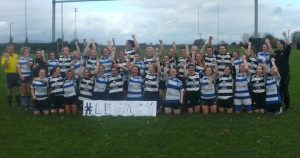 A very experienced Thurles side lined out against a brand new Mary’s team in what was to be a very one sided game. Thurles started the game the same way they finished it dominant in all areas, putting scores on the board in less than 3 minutes of play with a try from woman of the moment Christine Coffey who has just joined the senior side following on from an amazing year at U18 level. The game was played in very windy conditions. The next try came from Megan Callanan who also duly converted it. 12-0.

From the restart Stephanie Moore caught the ball and made a great run down the wing, giving it out to the backline with a combination of fast hands and a great break from Niamh Coman and a quick pop to Aisling O’Hagan saw Thurles cross over the line again. 17-0. Thurles flanker Joanne Harrison stole a St Marys ball in a lineout and it was given out to the backs who as a unit played excellently, Maria Woodlock carried the ball towards the try line and popped it to Ciara O’Dwyer for what was to be first of 4 trys for the player of the season last year. The try was converted by Megan Callanan bringing the score to 26-0. The next score came from a Thurles set piece, with the forwards mauling St Marys down the field, Megan Callanan peeled off the back of the maul and passed it to Christine Coffey who popped it to Maria Woodlock who powered over the line to put it down between the posts. 31-0. From the restart Jean Ryan caught the ball and literally carried 5 of the St Marys team through the middle of the field showing her immense strength and determination. A few phases of picking from the back of the rucks by forwards such as Catherine Kearney, Laura Carroll and Joanne Harrison released Ciara O’Dwyer over the line again bringing the score to 36-0.

Helena Birmingham who has just recently returned to the Thurles side and Megan Woodlock who has just come up from underage came on and made an impact instantly with some huge carries and solid scrummaging. The next score came from a well worked back move, Aisling Byrne who had a great game, broke the Mary’s line and made a great run down the field passing it to Ciara O’Dwyer for her hatrick 41-0. The next score came from the forwards who dominated in both scrums and lineouts throughout the game. A combination of picking from the back of the rucks released Jean Ryan to within inches of the line, Maria Woodlock saw her opportunity and touched it down for her second try. The try was converted 48-0.

Thurles defence never looked breakable throughout the game with huge tackles made by Christine Coffey, Miriam Harrison, Katie Fanning and Gemma Dunican. The next try came from a lovely skilful back flick from Christine Coffey into the hands of Ciara O’Dwyer which saw Ciara cross over the line for her 4th try. 53-0. The last score of the game came from Miriam Harrison who also had a great game. Aisling Byrnes passed it to Niamh Coman and Gemma Dunican popped it to Miriam who ran about 40m to put it down. The try was converted bringing the score to 60-0 after 60 mins. At this stage of the game St Marys who had unfortunately received some injuries during the game decided to ask the referee to blow the game up early.

Thurles would like thank St Marys for travelling down and as a team who are not long promoted from development we have had many losses such as this one. Marys never dropped their heads and persevered throughout the game earning respect from all of the Thurles players. Thurles ladies next game is away to Ballincollig on the 5th of November all support would be greatly appreciated.Training continues every Wednesday and Friday at Loughtagalla, with new players always welcome

Thurles Women’s RFC standing in solidarity withIrish Women’s Rugby team after today’s match against St. Marys RFC. Equality and respect for our women. Stand up and be counted! There’s nothing ‘casual’ about our Irish women’s team. Lets make this a legacy, not just a slogan!