Thurles Senior Women travelled the long road to Kerry on Sunday – Tralee and Thurles always put on a good show and this match was no exception. The game started at pace and the intensity was kept up by both teams as they battled up and down the pitch. Thurles got the better start with a great break set up by Gemma Dunican and Jane Ryan gaining great ground and Megan Callanan finding touch with a strong kick. In the resulting line out Christine Coffey poached the ball excellently only for Tralee to turn the ball over shortly afterwards forcing Holly O Dwyer to work very hard covering back to rescue what would have been a sure try. Another great team effort from Thurles was agonisingly close to seeing Stephanie Moore score her first try this season but Tralee’s defence were immense and held off Thurles advances yet again. It was then Tralee’s turn to play some very attacking rugby but Thurles defence was solid as ever with Christine making a brilliant tackle and Nicola Sweeney causing a rare forced error from Tralee with the pressure she was causing. The scrums were causing problems and in one collapsed scrum Ciara O’Dwyer Thurles flanker was injured although fortunately not seriously and was able to return to the play before the end of the match. Tralee from a line out made a kick up field with two of their players advancing on the Thurles try line it was left to Gemma Dunican and Holly O’Dwyer to make two try saving tackles. A scrum ensued very close to the Thurles line but the defence from Thurles was immense causing Tralee to knock the ball on. Play continued and Aisling Byrne was called on to save Thurles with a strong kick on her try line to relieve pressure. Tralee kept battering away at Thurles and ten minutes of intense pressure continued with Tralee eventually breaking the line and scoring a try. The conversion was missed. Half time saw Tralee ahead 5-0.

The second half started as intensely as the first with Aisling Byrne turning over the ball and great backs move starting. Thurles hands let them down and there was an unlucky knock on. Thurles were soon after awarded a penalty and Megan Callanan slotted the ball through the posts to bring the score back to 5-3. Play ensued and Jean Ryan was unlucky to be a second offender and get yellow carded leaving Thurles down to 14 players. Thurles had a scrum right in front of Tralees posts but Tralee came away with the ball forcing Jane Ryan to make a fantastic tackle to stop Tralee running up the pitch to score. Thurles were awarded a penalty a long way out from the posts on the sideline past the 22 but Megan Callanan after consulting with the Trainer decided to take a shot. Unfortunately the accuracy was there but the distance just fell short leaving the score at 5-3. Tralee cranked up the pressure again and long spell in Thurles half ensued. Aisling OHagan who had switched from full back to flanker in the second half made a great break from a scrum and looked set to break the line but Tralee descended in threes and smothered her effort. Tralee then charged down after a kick towards the Thurles try line but Gemma Dunican had tracked back putting in serious work and made a great tackle. Play continued at a savage intensity with Tralee smelling a victory and in the last play of the game Tralee’s 13 broke through a Thurles player to touch the ball down on the left wing. Final score 10-3. Some very positive things to take from this game it was a different level of rugby to two weeks previously with several players taking huge steps up in their level of play.

Training continues every Wednesday and Friday at 7:30. All new players welcome 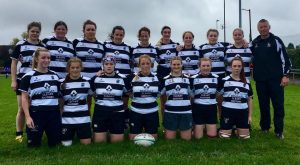