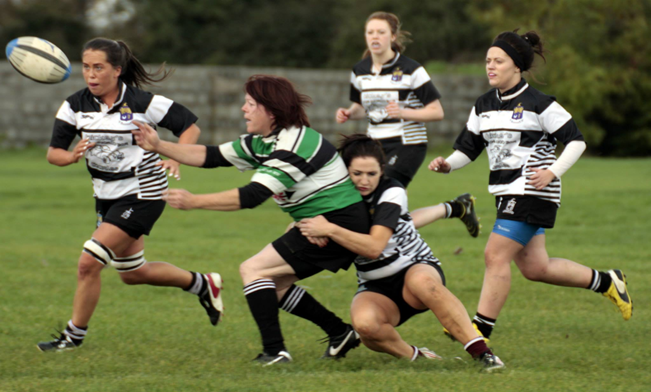 The Thurles Women’s XV faced the mighty Shannon RFC at Nenagh in the final game of the season for the ladies. Thurles started out the stronger team, running the ball with some massive carrys made by both forwards and backs. Shannon were hungry for a title as much as Thurles with both team having played each other during the season and winning one each it was neck and neck from the offset. Shannon scored the first try breaking the line and running it into the corner. The conversion was missed. Thurles were straight back up at them and due to a Shannon player coming into a maul from the side were awarded a penalty which was missed by the norrowist of margins. Thurles were not going to take it lightly and never let their heads drop when a well worked try eventually went over the line with a combination of fast hands and pace from the backs saw Aisling O Hagan make a great run and touched it down, the conversion was duly slotted over the bar by Megan Callanan who’s kicking this season would make Johnnie Sexton envious. Shannon responded by breaking the line again with a well executed try. The conversion attempt was successful. Shannon were winning 12-7 at half time.

Thurles came back on to the pitch and you could see the determination in their eyes they were not going to leave this final behind them. The next try went through the hands of all 15 on the field. With a combination of pick and go and then a quick release out the backs Nicola Sweeney was driven over the line in the corner by Jean Ryan and Ciara Quinn. This brought the game level. Megan Callanan scored the conversion from the side line with a kick that will go down in history in Thurles Rugby Club. Thurles were now in the lead for the first time and spent the remainder of the match with most of the possession. Every woman on the field played out of their skins and as a result had a well deserved victory becoming Munster Div 1 Cup Champions 2017. The ladies would like to thank their sponsors Clearys Motors Thurles and Renault Ireland for sponsoring the team this season and a massive thanks to all the support we received from club members family and friends.